Our not the smartest thief department has read the news reports of a robbery at the Walgreen’s drug store nearest my home.  The thief reportedly escaped with 15 tubes of toothpaste, brand not specified.

Note to the UPS driver blocking my street the Thursday before Christmas:  I know UPS requires its drivers to always park illegally, still, if you’ve got to talk to my neighbor for several minutes, blocking both my driveway and the street while doing so, I have a problem with it.  In the future, if you park at the curb in front of my house so I can get by, I promise I won’t report you to your supervisor.

In case you encounter a moose while wandering around Alberta Canada, here’s the official government advice.

Phone companies have the technology to block robocallers.  I don’t know what percentage of phone company revenue comes from robocallers, but I’m guessing the money is why the providers of telephone service don’t allow land-line customers to block them.  So, here’s a suggestion.  If you cancel your land line, tell the telephone company that their refusal to provide a tool to block robocallers is the reason.  If enough people do that, maybe it will move the companies to help us block them.  It’s a thought, and a hope, anyway.

It would be wrong, but reasonable to assume that everyone’s nether regions are in the Netherlands.

I have a lot of problems dealing with CVS Caremark with respect to mail-order prescriptions.  It seems to me that every error that they make is in their favor too.  Here’s one thought to improve their customer service:  Calls I make typically take an hour or more, including being placed on hold several times for prolonged periods.  So, I suggest they get a second piece of hold music.

Actor Alan Thicke passed away in mid December, after suffering a heart attack while playing ice hockey.  My daughter commented that if you must die, many Canadians would prefer to die playing hockey.

According to all the supermarket tabloids, Tarek and Christina’s marriage appears to be at an end, so maybe HGTV should change the promos it’s currently running for their show, Flip or Flop. 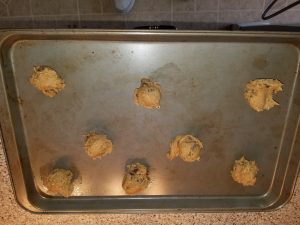 It’s hard for me to believe that I’ve been writing this blog for almost nine years now.  The third story I ever told here was about a high-school girlfriend named Leslie.  I was reminded of that blog post, and of Leslie the other day because I have been baking, and eating too many chocolate chip cookies leading up to Christmas.

The cookies reminded me of Leslie because when I was a Freshman in college, long after we broke up, she sent me a box full of delicious, homemade cookies.  She didn’t want to rekindle something between us that had never really caught fire in the first place.  She said she felt like baking, and didn’t want the cookies to go to her hips.  So, she sent them to my hips, instead.  I gained a few pounds eating those cookies.  I’ve also gained two or three pounds eating the cookies I made this week.

Leslie and her husband invited Saint Karen (who must be a saint to put up with me) and me to their place in New Jersey during the first year we were married.  I don’t think I’ve seen them since.  While I hope they are well, and have had a happy life, I don’t know where they are.  If I did, I’d send the cookies I made this week to Leslie’s hips so I wouldn’t eat the rest of them.

Since the first night of Hanukkah and Christmas Eve coincide this year, who’s going to anchor the TV news tomorrow night?

Now that the electoral college has voted, how soon after he takes office before one of the sore losers begins impeachment proceedings against President Trump?  I didn’t vote for either one of them.  Still, I hope the level of sore losing exhibited by many Clinton supporters proves unfounded.  I already think it’s unprecedented, at least in my lifetime.  I suggest it’s time to stop name calling, and to save the criticism for things he proposes and things he actually does.

Have the people who want to do away with the electoral college considered that it would require an amendment to the US Constitution, and amending the Constitution isn’t a one person-one vote proposition either?  It requires ratification by two thirds of the states.  Does anyone think Utah, Nebraska, Montana, or either Dakota among others would ever vote to abolish the electoral college?

Joan Baez has been elected to the Rock and Roll Hall of Fame.  Isn’t that all the evidence you need that the place needs to change its name?  No quarrels about her as a musician or as a cultural figure.  But I am unaware of any song she’s ever sung that would be considered rock.

What’s the point of security cameras when the images are usually so blurry you can’t recognize anyone in the picture or read a license plate either?

Bath sheets are about 80 percent larger than bath towels, so why do they cost twice as much?

How does one judge progress on the comment front?  This week, most of them were still plugging drugs for the treatment of erectile disfunction, but one was for Propecia, which is a treatment for baldness.  I spared you all of them.

A Southwest flight en route from Philadelphia to Orlando was diverted recently when a woman passenger gave birth in the air.  I couldn’t help wondering if the new mom had to buy a seat for the kid, and whether that airline charges an in-flight birth fee.

As the holiday season is upon us, I’m compelled to ask, if the President of the United States is the most powerful person in the world, what the hell is he doing pardoning turkeys?  And why do the media cover it?

Also since the holiday season is upon us, isn’t egg nog redundant?  What other kind of nog can you drink besides egg nog?

Woodbury Commons is a large outlet mall, north of New York City, near where NY Rte 17 joins the New York State Thruway.  During the holiday season, you can take a helicopter from Manhattan to the shopping center and back for the low, low price of $390.  If you can afford that, why are you shopping at an outlet mall?

Why is the second “C” in Connecticut silent?

Do you like creamy or tangy coleslaw?  I like tangy.  The only time I eat creamy is to taste it to find out if it’s tangy.

My wife watches the Animal Planet show, “My Cat from Hell.”  I was walking through the living room during the opening shot of the host, Jackson Galaxy, driving along.  You could only see the interior, but obviously, a convertible and obviously old, because it has vent windows.  I took one look and asked, “Why is he driving such an old Lincoln?  When he parked, you could see it was a ’57 Lincoln convertible.

But that’s not my question.  What I want to know is how I can instantly recognize the interior of a sixty-year-old car, but I don’t know anything that would make me a ton of money, or remember the name of anyone I met yesterday?