Keith Palmer is the British police officer who was killed in a terrorist attack on Westminster Bridge, and the British Parliament.  I know that British police have a tradition of going unarmed, but as the world is today, I’m surprised that all the police at a likely terrorist target such as the British Parliament are not armed.  Some are, but Palmer wasn’t.  If he had a gun, he might be alive today.  Arming all members of the security detail at Parliament is now being discussed.  It’s a smart move.

I think all terrorist attacks are awful, but Wednesday’s attack on the British Parliament was a little more personal for my wife and me than others we’ve heard of.  Three years ago, Saint Karen (she must be a saint to put up with me) and I were at the very location where the attack took place.

To be clear, the Republican proposal to repeal, and replace Obamacare didn’t fail because it cut too many benefits for American taxpayers.  It failed because members of the conservative, Republican, Freedom Caucus wanted more cuts.

Considering that House Republicans has voted to repeal Obamacare multiple times a year for years, I was surprised that they didn’t have a workable alternative they could agree on ready to go back in January.

Now, there’s talk of moderate Republicans in Congress trying to work with moderate Democrats instead of with the right wing of their own party.  I worked for Congress many years ago.  It would be nice to return to a time when Republicans and Democrats were people who disagreed with one another, not mortal enemies who must be battled to the death.  I don’t know how that stance evolved, but it’s not good for the country, and as far as I can see, it’s not good for Republicans or Democrats either.

My wife wanted me to put gas in her car, but I had to check whether I won the lottery first.  I told her if I was super rich, I might get a different car that already had gas in it instead.  I did win the lottery, but only a dollar, so I filled her car up with gas as she asked.

My daughter has a plan to show appreciation to her friends, and relatives if she wins a multi-million-dollar lottery.  She says she’ll gift those people with a nicely framed photo of her with the giant check.  I told her she didn’t really need to have the pictures framed, but she insists she’s a class act.

I’m sure Staples, the office supply store, knows what items make the most profit per square foot of retail space.  Still, it seems odd to me that there are dozens of office chairs in every Staples store I visit, but no desks.  I’d rather not buy a desk on line because I can’t tell how sturdy it is and if I find parts broken as I try to assemble it, repacking it to return to an on-line seller is a huge pain.

www.pseudodictionary.com is a website that contains words people have made up over its years in existence.  You must spell out the word, provide a definition, and use it in a sentence, just like vocabulary homework in high school.  I discovered the website recently and contributed three words I’ve made up, and used in this blog.  I used my real name in submitting these words, so if you can figure out which words, you can unmask me.

Occasionally, when I’m bored, I use the internet to look for people I used to know.  Unless they are or were very important in my life, I don’t try to reconnect.  I’m still good at being nosy, but need to practice to retain proficiency.

I’ve mentioned a few times here that I remember one high school girlfriend not because she was important to my life, but because I managed to humiliate myself in her presence more than I usually did with girls I dated.  The last time I wrote about her was last Christmas Eve when baking cookies reminded me that she sent me a care package of cookies during my Freshman year in college.

At that time, I hoped she and her husband were well and happy.  In my nosy, bored searches, I’ve since learned that her husband, Bill, passed away about two years ago.  Bill was a high school friend too, and we attended the same college.  My wife and I haven’t seen them in decades, but I’m still sorry to learn that he died.  I hope enough time has passed that Leslie’s memories of him are mostly of the good times, not of the grief she must have felt as he slipped away.  Even though I now know where she lives, I’ve changed my mind, and won’t be sending her any homemade cookies.

Maybe I’ll stop looking for people that way because sometimes I learn things I really don’t want to know.

I’m having a couple of teeth pulled tomorrow, so I wondered aloud at the dinner table whether the tooth fairy brings money to people my age.  My daughter said she didn’t.  According to my daughter, people  my age who lose teeth receive dentures from the tooth fairy, not cash.  She must get it from her mother, because God knows I’m completely normal.

I admit I am pathologically punctual, and although I understand how people get behind in their schedules during the day, I don’t understand how people in the medical profession are consistently late for their first appointment of the day.  Most people, anyway.  Every dentist I’ve ever used has been extremely punctual, throughout the day.  If you’re not on time when you start, you’ll never be on time.

Case in point is Monday, when I had an 8:00 AM appointment to see an audiologist.  I was there at 8:00 AM.  The door was locked.  I phoned.  No answer.  The receptionist arrived a few minutes later.  No apology.  The audiologist came in at 8:10 and saw me at 8:15. No apology there either.  Not only that, but the audiologist seems completely unaware of time.  When I left the office, she told me to enjoy the rest of winter.  I already did that:  Monday was the first day of spring.

If, like me, you are Irish-American, diabetic, and planning to celebrate St. Patrick’s Day, be advised that corned beef and cabbage won’t do bad things to your blood-sugar level.  Potatoes and soda bread are another matter.

I saw a commercial for Scott’s Turf Builder lawn fertilizer.  The ad said now is the time to apply Turf Builder to my lawn.  I went outside to do just that, but I can’t find the lawn right now. 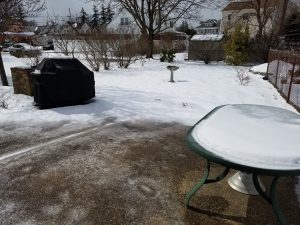 From prior to the recent snowfall, I’ve never seen this before, and I bet you haven’t either.  It’s a legally parked UPS truck.

This is supposedly where the idea of electronic communication being called spam comes from.

If you run your own blog and are new to it, feel free to welcome comments if you will.  However, I suggest you moderate the comments, and if you get one that doesn’t appear to relate to anything you’ve written, don’t publish it.

What some spammers do is send out what seems like a real comment to test a blog.  Then, if the comment gets published, they start with the spam for Viagra, Cialis, etal.  I made that mistake at least once, and now I get at least one comment an hour that has nothing to do with what I’ve written.

This just in, the minority leader of the U.S. Senate, New York Senator Charles Schumer, has called for a special prosecutor to investigate Russian Dressing.

I should have mentioned this much sooner.  I apologize.  Alan Colmes, the liberal political commentator, passed away recently from cancer at the age of 66.  Best known for the Fox News TV show, “Hannity and Colmes,” among the many places Alan hung his hat was talk radio station WABC, where he was called Alan B. Colmes.  His middle initial wasn’t B, it was S.  Early in both of our careers, I was the newsman on his Sunday music show on a now defunct Long Island radio station.  “Nice,” is a word anyone who ever knew him, including me, would use to describe him.  He was also kind and gracious to those of us he passed on his way up.  Condolences to his family and RIP Alan S. Colmes.

It was meant to be.  I collect popular music.  Mine is a medium-sized collection of around 8,000 songs.  Joel Whitburn’s “Top Pop Singles” is a reference book that lists every song that made the Billboard top 100 charts.  My copy is a paperback and covers 1955-1993.  I’ve used it a lot over the last 24 years, and a paperback book that’s 24 years old is likely to be falling apart.  To nobody’s surprise, mine is.  So, I looked on line and found a hardcover version that covers 1955 through 2012.  It’s not the latest edition and it was on sale for $48.94, including tax and shipping.  I happened to have an Amazon gift card with a balance of guess how much?  $48.94!  I ordered the book.

Baseball causes warm weather.  I’ve told you that before.  So, when your team’s games are on the radio, please put the game on in your car and drive around with the windows down.  It will do a lot more toward making the weather warmer than waking up some dumb groundhog in early February in Pennsylvania.