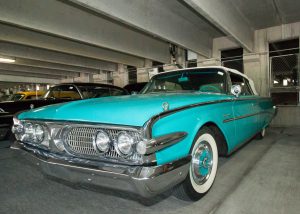 I really like old cars.  I have since they were new.  So, on Thursday, I saddled up and went to the Barrett-Jackson collector car auction at Mohegan Sun Casino in Connecticut.  Even attending the auction without registering as a bidder is fairly expensive, especially considering what it costs to attend a local cars and coffee or show and shine event.  They’re usually free.  But you’ll hardly ever see a wider selection of cars.  I went to one of their auctions in Scottsdale AZ years ago.  This is the first one they held at Mohegan Sun. Uncasville, CT is a lot closer to where I live than Scottsdale AZ.

The auction staff and the casino staff were cheerful and helpful.  If I could offer two suggestions for improvement, the first would be more signs.  My son has a superior sense of direction.  When he was four years old, he could tell you how to drive to his grandparents’ house—eight states away.  I think he would have gotten lost inside the casino while trying to find the cars before they went on the auction block.  My second suggestion would be to find a different place to exhibit a large portion of the cars instead of using one of the casino’s parking garages.  That place was too dark to really display the cars well.

You don’t think of Ford as building extremely rare cars.  But a 1960 Edsel convertible is extremely rare.  Ford built only 76 of them and around 3,000 total 1960 Edsels in any body style.  Before closing down the failed brand, Ford only built 1960 Edsels for about five weeks.  This isn’t an Edsel convertible, though.  It’s a Ford that was changed into an Edsel later in life, or what collectors call a clone.

I’m a casual fan, not an expert, but it fooled me.  When you go to a Barrett-Jackson auction and look at the cars before the bidding starts, most of them have a detail card attached to the passenger side of the windshield.  This car didn’t have such a card when I saw it on Thursday.  It was properly described in the catalogue and on line.  I haven’t checked whether it crossed the auction block yet, but I’m sure that when it does, or if it has, it was also properly described too.

Still, until I looked it up more than 24 hours after I took this picture, I was pretty excited to think I had seen an actual, real-life unicorn.