There are a little over 6,600 commercial, FM radio stations in the United States.  Tonight, between 10 PM and midnight, I’m going to be on one of them.  Which one is up to you to figure out.

In California this week, two judges were reelected and the fact that they were makes you question democracy.  One was the judge in Santa Clara who recently sentenced a rapist and star athlete at Stanford to six months in jail.  The other, in Orange County, was reelected despite having admitted to having sex in the office with an intern and with an attorney who had cases before his court.  I call both of these events electile dysfunction.

A man in England, Richard Huckle, has been sentenced to 22 life sentences for raping children in Malaysia.  I’m okay with that.  The article I read said he’ll have to serve a minimum of 25 years in jail.  25 years for 22 life sentences?  I’m not sure which, but if one of those is right, I have to think the other is wrong.

My Daughter has a good idea.  Have you ever watched the TLC TV show “Cake Boss?”  They have several shops in the New York area.  One of them is a few miles from our house.  My daughter wants to go in there and find out if they can make her a cake that looks like a cake.

These days, my wife usually hits the hay around 10:00 PM.  I usually go to bed around 1:00 AM.  When we started dating as teens, she would let me hang out at her house, sometimes until 1:00 or 2:00 AM.  It just occurred to me that she married me so she could get some sleep.

I’m not necessarily claiming credit here, but the most recent TV spot for Burger King’s nuggets does tell you what in them. 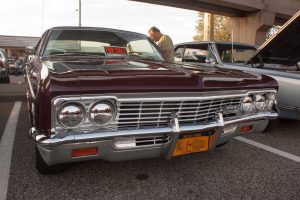 I’m trying to convince my wife, Saint Karen, that I’m a saint too because I didn’t bring this car home from a local cruise night.  It’s for sale and it’s a ’66 Chevy Impala SS with a 396 cubic inch engine.  Not buying it, though, didn’t take as much willpower as she thinks:  it’s an automatic.

When I was a Freshman in college, her parents allowed my then 16-year-old girlfriend to travel 250 miles to visit me for a weekend.  I was surprised all those years ago, but astonished recently when I learned they did not let her go on her high school senior trip a year later.  Her parents really liked and trusted me.

I keep a few packets of duck sauce, soy sauce, ketchup, and mustard around the house.  You know, the ones you get with your take-out food orders.  But I never keep extra Arby’s Sauce around.  If I ask for five please give me five, but if I ask for one and you give me five, four of them are going in the garbage.