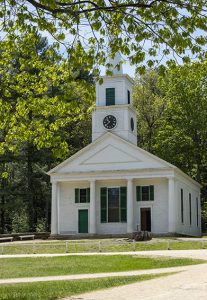 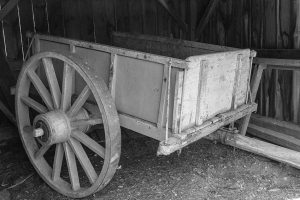 Saint Karen and I spent a little time in Massachusetts last week, visiting Old Sturbridge Village and Salem.  I’d recommend both.  We like historical places.  Salem has some preserved pre-Revolutionary buildings and cemeteries that date to the 1600s.  Sturbridge represents a pre-Civil War farming communities.  Some of the buildings were preserved/restored locally and some were purchased elsewhere, moved to Sturbridge, and reassembled.

The two pictures above are from Sturbridge, the Central Meeting House which was built around 1832 and an antique farm wagon I found in one of the many barns in the Village.  We were there on a beautiful late-May day.  I imagine autumn in Old Sturbridge Village is a photo opportunity just waiting to happen too.  Maybe we’ll go back for fall color.

I’d prefer to have the pictures side by side, but I’m not good at layout in Word Press.  If I figure out how to do that, I’ll change it.

If I have any pictures I like from Salem, I’ll try to put them up soon, and perhaps say a little more about Salem as well.

The docents in Sturbridge were really knowledgeable, and outgoing.  I had an informative conversation with the tinsmith, and another with the cobbler.  The thing that really caught my attention was in the school house where the woman playing a teacher displayed a book about American  history.  It was only a few pages long.  After all, she said, there wasn’t that much American history back then.  We were in the school house when a school field trip came through.  The school kids’ questions were entertaining too.  They were especially glad to know that school children in the early nineteenth century did have recess.

One improvement I’d recommend for Old Sturbridge Village (and it is trivial) is when you get to the parking lot, it’s a little difficult to figure out where the village entrance is.  A couple of additional signs would help with that.