Memorial Day first became a holiday (originally known as Decoration Day) in the northern states after the Civil War.  The Grand Army of the Republic, a veterans’ organization for those who fought for the North first declared it to be May 30th in 1868.  Its name gradually changed to Memorial Day and eventually came to represent Civil War veterans from both sides and later from other wars.

I was surprised to learn that Memorial Day wasn’t adopted as the official name of a federal holiday until 1967.  The law that changed the date of Memorial Day and three other holidays to Mondays was enacted in 1968 and took effect in 1971.

Memorial Day has become a lot more than just remembering the troops who died in our nation’s wars, but because it is still that, this image is from Gettysburg National Cemetery. 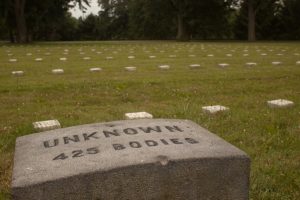