This is the 600th blog entry to the Sisyphus Project. That’s 600 in roughly 8.1 years.  I think we’re pretty much on target.   I started this to entertain myself, and it does that.  I sometimes try to inform, and also to make occasional jokes that other people find funny.  You’re the judge of whether I achieve those goals.  I said I’d write about my frustrations, but also about other stuff.  I’m still doing both. Perhaps I’m not quite as frustrated as I used to be because I don’t have THAT job anymore.  One thing that has surprised me is I don’t write as frequently as when I was employed full-time.  Since I have more time, I thought I would pontificate more.  But I just don’t.

Usually, my posts consist of random assertions, and/or questions.  When I rant on a single topic, it’s most frequently about politics, and/or government.  Still, I’m trying to go light on the 2016 Presidential contest.  Is this really the best that the USA can come up with in the way of major-party candidates?

I was recently able to restore some of the format elements of the blog, including a title picture I’ll change once in a while, and the list of three blogs I endorse.  One caveat on the recommended blog list: my friend Richard’s blog is still entertaining, and well worth your attention.  He just doesn’t post in it very often anymore.

Going forward, I’d like to propose a holiday this year.  It will be one day (or preferably a three-day weekend) when no media in the United States mention Donald Trump, or any member of the Kardashian/Jenner tribe.  It’s a desirable goal, and an achievable one as  well.  After all, we don’t hear about everything Paris Hilton or Charlie Sheen does anymore.  I suggest we do it in August.  We could all use a three-day weekend in August.  Let’s work on that, shall we?

I’m the kind of person who can’t help doing math in his head.    Because of that, this sign caught my attention. 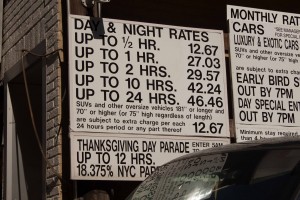 It’s at a parking lot on 34th Street in Manhattan, just east of Ninth Avenue.  No, I don’t know why an hour of parking costs more than two half hours.  That’s the thing about the sign that caught my attention in the first place.  There was nobody around I could ask.  My best guess is this particular parking lot has hours that contain more than 60 minutes each.

On TV news last night, I heard that the majority leader of the New York State Senate, “. . . prides himself on being open and transparent.”  I pride myself on being opaque.  I feel very strongly that if I were transparent, that would be disgusting.

I can’t wait for the baseball season to begin.  Tomorrow, I won’t have to. I had hoped to attend Baseball Spring Training, and catch a few games in March, but my wife felt she had to work.  I’d rather be with her than at a ballgame, but that’s about the only thing I’d rather do.

I still haven’t hit the lottery, so I have yet to hire an editor or proof reader.  I go back from time to time, to correct past mistakes I’ve made.  Lately I’ve been working on apostrophes, and Oxford commas.  If you should find a mistake, you’re more than welcomed to keep it to yourself.